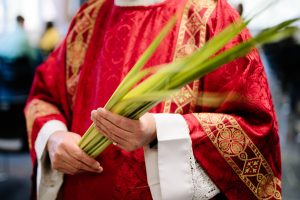 Ash Wednesday Liturgy of the Word with Distribution of Ashes

Triduum in a Family of Parishes – coming soon!

Sunday of the Word of God (3rd Sunday of Ordinary Time)

Visit the Office for Persons with Disabilities to find resources on accessible worship including ASL interpretation, sensory-friendly worship considerations, and more!

These evaluation tools are perfect for parish worship commissions, pastors, and parish staff to evaluate the liturgical celebrations of the seasons.

How is the date of Easter determined? Is it the same for all Christians?

Easter Sunday of the Resurrection is the Sunday after the first full moon (the “new moon” or the “paschal moon”) after the vernal equinox. In a sense, before we can celebrate the Resurrection of Jesus and the redemption of all creation, the earth must be ready, the sun must be ready, even the moon must be ready…all of creation must be prepared to greet the Rising Dawn!  This is the method of computation for Western Christians. The Orthodox continue to follow an older calendar, thus sometimes the Sunday is different.

Why does the ending of each Collect (Opening Prayer at Mass) no longer include the word “one” before the word “God”?

The translation of each liturgical text around the world is based on a master text in Latin (a “typical edition”) which helps to unify the language used in liturgical prayer throughout the universal Church. In the Latin, the word “one” (unum) is not used in the formula that concludes each Collect, and thus shouldn’t be included in the translated texts, even though it had been since the texts were first translated after Vatican II. Since the third edition of the Roman Missal was re-translated in 2010, the question of adjusting this text in has been considered by both the bishops of English-speaking nations and the Holy See. Finally, in the winter of 2021, the Holy See confirmed the change made by the U.S. bishops to bring the English text back to fidelity to the Latin.  You can find more details here.

What options may be used for the Profession of Faith at Mass on Sundays and Solemnities?

#18 of the Roman Missal puts the Nicene Creed in first place, both with chant notation and text. #19 then specifies that “Instead of the Niceno-Constantinopolitan Creed, especially during Lent and Easter Time, the baptismal Symbol of the Roman Church, known as the Apostles’ Creed, may be used.”  This gives a clear indication that the Nicene Creed is to be normatively used throughout the year and the Apostles’ Creed could be used during Lent and Easter.  There is no indication that the Apostles’ Creed would be used during other seasons simply because it’s shorter.  Also, when other sacraments or rites are celebrated during Mass (e.g, Baptism or the Rite of Election), the Creed may be omitted.

When can we celebrate the anniversary of the dedication of our parish church?

You can celebrate on the actual anniversary date unless a solemnity of a higher rank is observed.  You can also move the celebration to an adjacent Sunday of Ordinary Time.  If neither of those options work, the Universal Norms for the Liturgical Year and Calendar specify that the anniversary of the dedication should be celebrated on the Sunday prior to All Saints Day.  Celebrating the anniversary of a church’s dedication is an important solemnity for a faith community.

If there is no singing at a weekday Mass, should we recite the Entrance and Communion antiphons found in the missal? Who should recite them?

Must the monetary gifts collected during Mass be brought forward with the gifts of bread and wine?

No.  While the General Instruction of the Roman Missal notes that it is “acceptable” for money or gifts for the poor or for the Church to be brought forward, it is not required.  Many parishes find it helpful or more secure to simply put the collected money away.  Some parishes collect money and secure it in the safe, bringing forward tangible gifts for the poor (e.g. food, clothing, etc.). In any event, the GIRM directs that money or other gifts for the poor, “given their purpose, they are to be put in a suitable place away from the Eucharistic table.” (GIRM 73). It is also not necessary to unduly prolong the Preparation of the Gifts by waiting for such collected items to be brought forward, but if they are brought forward, it would be undesirable that they are placed in a visible way after the Eucharistic Prayer begins with the Preface Dialogue.

How many intentions must there be for the Universal Prayer at Mass?

The Church does not specify precisely how many intentions may be included in the Universal Prayer, only that they should be “sober, be composed with a wise liberty and in few words, and they should be expressive of the prayer of the entire community.” (GIRM 71)  Normally, 4-6 is sufficient.  The sequence of these prayers should normally flow from the needs of the Church to the needs of the world, then for those in any difficulty, and finally for the local community. (GIRM 69)

Must an Advent wreath be placed in the sanctuary of the church? What about the creche/manger scene?

No.  In fact, nothing should detract from the centrality of the altar in the sanctuary, even as regards seasonal décor.  An Advent wreath or creche may be placed in the sanctuary, but it should not obscure the centrality of the altar.  The U.S. bishops teach: “The altar should remain clear and free-standing, not walled in by massive floral displays or the Christmas crib, and pathways in the narthex, nave, and sanctuary should remain clear.” (Built of Living Stones 124).  Consider the gathering space, foyer, side chapels, etc. for placement of seasonal devotional symbols rather than the sanctuary itself.

Is it still permissible to use the Lectionary for Masses with Children?

Yes, the Lectionary for Masses with Children may be used in the liturgy, though its status is a little out of the ordinary. The Lectionary was first approved in November 1991, as a response to the provisions in the Directory for Masses with Children (1973) calling for the inclusion of children in the Liturgy of the Word and allowing for adaptations to facilitate their participation. The Holy See gave its provisional confirmation in 1992 for a three-year experimental period and mandated a study of its effectiveness afterward; that confirmation was extended in 1997 and in 2000 to allow the then-NCCB to complete the study and make further recommendations.

As reported in the October-November 2005 Newsletter, a second edition of the Lectionary for Masses with Children was prepared and approved by the Conference in November 2005, but it has never been confirmed by the Holy See. Since the current edition has not been explicitly forbidden, the general interpretation is that it may continue to be used. It should be noted that the instructions within that Lectionary are still effective, and that it may only be used when the clear majority of people attending Mass are children. This generally precludes its use at Sunday Masses, except during a separate Liturgy of the Word for children in an adjacent space.

The Lectionary for Masses with Children is currently sold by Catholic Book Publishing Corp. and available on their website, and at Catholic bookstores.

May baptism be celebrated during Lent?

Yes.  In fact, Lent is a season focused not only on prayer, fasting, and almsgiving, but also on baptism: both the preparation of those to be initiated at the Easter Vigil, and also the preparation of all the faithful to renew our own baptismal promises at Easter.  This is why the Church forbids the emptying of baptismal fonts and holy water stoups during Lent (only during the Triduum).

Baptism is not prohibited, and in fact, delaying baptism for 6 weeks may be pastorally undesirable.  That being said, it would best respect the nature of the Lenten Sunday liturgies to celebrate baptism outside of Mass rather than during in this season.

As a proclamation of scripture within the Liturgy of the Word, the General Instruction of the Roman Missal directs that the Responsorial Psalm should be sung from the ambo or another suitable place. (GIRM 61). However, other “suitable places” could include a separate lectern, somewhere in the choir area, or other location.  Particularly if the choir will either intone the antiphon or sing the verses of the psalm, it may make sense for a psalmist to be located in closer proximity to the choir.

During a time of public health concern, it may also make sense for the ambo to be reserved for fewer ministers, and thus it makes sense for the psalmist to sing from elsewhere.

What is intinction? Can it be practiced in my parish?

Intinction is the practice of dipping the consecrated Host into the Precious Blood for ministry of Holy Communion under both kinds to the faithful. This is much more common in the Eastern rites, and while permitted by the General Instruction of the Roman Missal, it is not a normative practice. There are logistical as well as pastoral issues, and the sign value of drinking from the chalice is important. While it’s a legitimate way for concelebrating priests to receive Communion under both species even during a pandemic (which they are legally bound to do), it is not the preferred form for ministry to the faithful in the Archdiocese of Cincinnati or in the U.S. writ large. 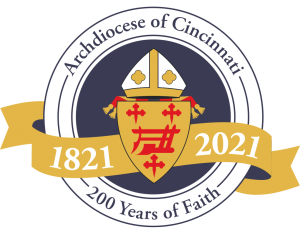